Venezuelan artist Carlos Cruz-Diez, considered one of the world’s leaders in integrating art with architecture and urban spaces, died in Paris last weekend at the age of 95.

Cruz-Diez was known as an expert on “kinetic-optic art,” and his work has been featured in 16 countries. His explorations of color created a sense of movement and action, joining masters like Alexander Calder and Marcel Duchamp. 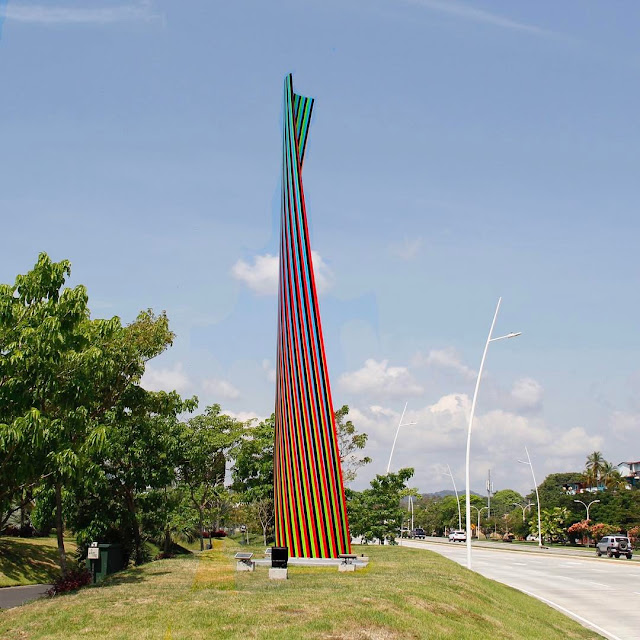 The late artist had a strong connection to Panama and his work can be found throughout the capital. He founded a studio, Articruz, in Panama City in 2009, which has focused on integrating his work into the city’s built environment. From the bright colors of a fence in front of the Aqualina tower in Punta Pacifica to an 11-meter-tall sculpture, Cromovela, along Avenida Balboa.

His most recent work was a three-story façade for the Kenex Plaza building in Obarrio, tubular elements and fins of red, green and blue tones. “The design allows it to be seen from inside and outside the building while allowing light and ventilation to pass through the parking spaces,” notes La Estrella.

The Museum of Contemporary Art (MAC Panama) opened an exhibition dedicated to his work entitled, “Cruz-Diez: The Color Making,” featuring 60 years of his work.

The exhibition, which continues through Aug. 18, features many forms of Cruz-Diez’s work, including his explorations of color, his work in the architectural realm and interactive chromatic environments. “Each of the works allows the visitor to experience the color appearing and disappearing in front of their eyes, changing in the ephemeral reality of the moment and in the immaterial support of space,” according to the museum’s material.

Cruz-Diez primarily lived in Paris in his later years and his work is in the collections of many of the finest museums in the world, including the Museum of Modern Art (MoMA), the Tate Modern, and the Center Pompidou in Paris.

The artist was “a contemporary theorist of color whose artistic proposal is based on four chromatic conditions: subtractive, additive, inductive and reflected color,” according to the artist’s site. “His research has brought art into a new way of understanding the phenomenon of color, greatly expanding its perceptual universe.”